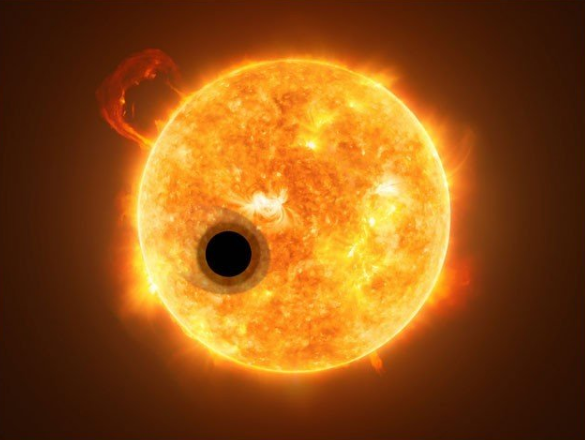 The “softest” planet in the universe has puzzled scientists
PASADINA, California: Scientists say the planet Wasp 107b, discovered three years ago, is so soft and low-density that, according to our current astronomical theory, the planet should not have come into being.

It should be noted that at the time of discovery, Wasp 107B was declared as the lowest density planet where a large amount of helium gas was also discovered. But now a global team of astronomers has discovered that its density is much lower than our previous estimates.

Explain that Wasp 107b is part of a planetary system located 211 light-years away from us, in the direction of the constellation Virgo.
This planet is counted among the super-Neptune type planets called ‘orange giants’. That is, most of it consists of gas.

It is as close to its main star (WASP-107) as the distance between our Earth and the Sun.

Due to its close proximity to the main star, it is also very hot and its outer temperature has been found to be around 462 degrees Celsius.

However, the most interesting thing is that although this planet is about the size of Jupiter, the largest planet in our solar system, its mass (the amount of matter) is about ten times less than that, that is, our ‘Neptune’. Is like

Such a low density of a planet is possible only when the mass of its core is very small.

In a recent study, experts have carefully estimated that the heart mass of Wasp 107B is incredibly small, at only 4.6 times that of Earth. This also means that 85% of the substance in Wasp 107B is in the form of gas.

However, the most troubling thing for experts is that Wasp 107b is so close to its main star that there is no possibility of a massive gaseous planet. This is what our conventional astronomical theories tell us.

If our hypotheses are correct, then Wasp 107b would have formed an orbit far away from its star, which would have been pushed closer to the star by the gravity of other nearby planets and even larger. ۔

But if that doesn’t happen, it’s time to dump her and move on. However, before that we have to discover other planets like Wasp 107b which are not only close to our star but also gas giants.

Katy Perry Biography: She is known as Katy Perry. She is an American singer, songwriter, and television judge. After singing in church during her...