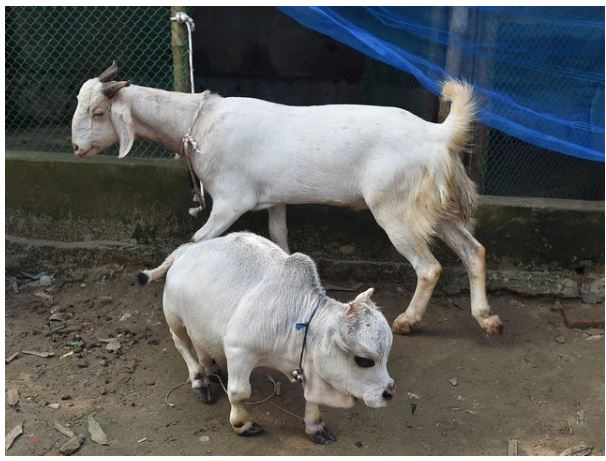 Tanta tied the knot to see the world’s largest bony cow in Bangladesh
Dhaka: Queues lined up in Bangladesh to see a 51 cm tall and 66 cm long cow whose owner claims that it is the smallest cow in the world in terms of height.

According to the international news, the cow “Rani”, which is reared in a farmhouse in Bangladesh, has become popular and in just three days, more than 15,000 people from all over the country have come to the farmhouse to see it.

MA Hassan, manager of Shakur Agro Farm, which raises the queen, told the media that the cow is 51 cm tall and 66 cm long while it weighs only 26 kg. Thus it became the most dwarf cow in the world.

MA Hassan said that at present the record of the world’s most bony cow is held by Mankim in the Indian state of Kerala which has a height of 90 cm while my cow queen has a height of 51 cm so now this record belongs to Rani. Must be a name.

The owner of the cow also measured the cow in front of the citizens and the media who came to see the “queen”. On this occasion, the people demanded the government to contact the Guinness Book of Records to receive this award from India.