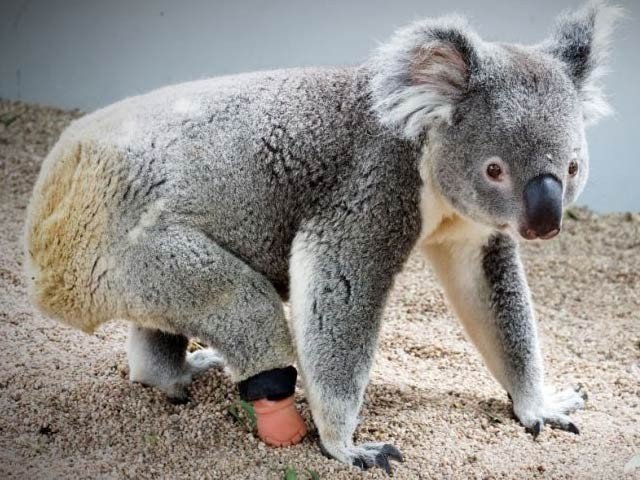 BRISBANE: A koala bear, born with one leg in Australia, has been fitted with a prosthetic foot by a local dentist and is now happier. Seeing his shortcomings go away, the koala is climbing trees and has no difficulty walking.

A wildlife official in Australia said the koala was named after Trump, whose prosthesis was fitted by a neighboring dentist.

Marley Christian, an animal nurse, recovered the koala from New South Wales in 2017. His mother was chilly and he lay helplessly beside his mother. He did not have a claw on one of his legs and there was a bulge like dry bone.

However, after putting on a little shoe, he immediately jumped up and started running. Seeing this, Marley burst into tears of joy. This prosthetic leg has changed his life.

For a time, the koala was housed in a center 136 kilometers from Brisbane. All the experts have been thinking for a long time about correcting his foot defect. An American animal manufacturer of artificial limbs and hands made a shoe for him which was not successful.

John Dolman, a dentist near the center, then asked for his services. They have made a pink shoe for the bear with velcro on the top and a soft design on the bottom that protects it from slipping.

However, experts will continue to consider changes to the design of his shoes.