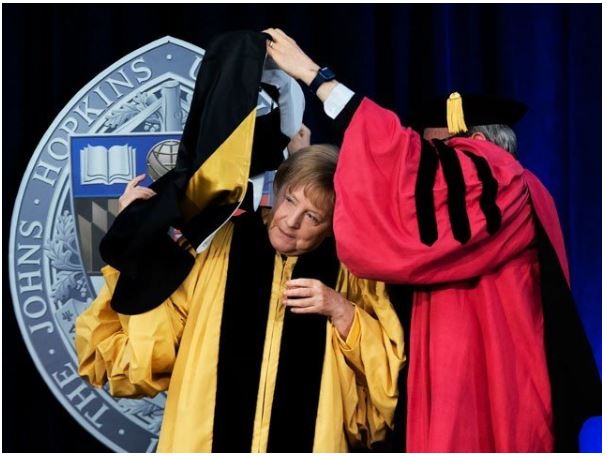 Maryland: German Chancellor Angela Merkel was dressed in traditional graduation attire as she received an honorary degree from the American University Johns Hopkins.

According to the international news agency, German Chancellor Angela Merkel was awarded an honorary degree by Johns Hopkins University for which a simple but dignified ceremony was held but the German Chancellor remained entangled in the gown throughout the ceremony.

In a video that went viral on social media, it can be seen that he was given an honorary degree by the university and then was given a part of the traditional dress for the graduation ceremony.

Angela Merkel, 67, was confused on the occasion and did not understand how to take the veil on which the university principal who conferred the degree helped her. However, Angela Merkel remained confused.

It can be seen in the video that Angela Merkel also showed signs of anger on her face for failing to fix the gown. The video went viral on social media as soon as I watched it.