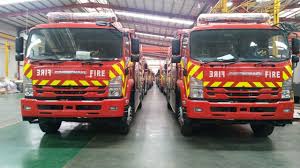 The spokesman said that fire tenders are a gift of Prime Minister Imran Khan to the citizens. Such a large number of fire tenders have not been imported in the past. Governor Sindh Imran Ismail will hand over the fire tenders to KMC on February 14.

On the other hand, on the occasion of President Dr. Arif Alvi’s visit to Governor House in Karachi, Sindh Governor Imran Ismail also briefed the President on fire tenders.