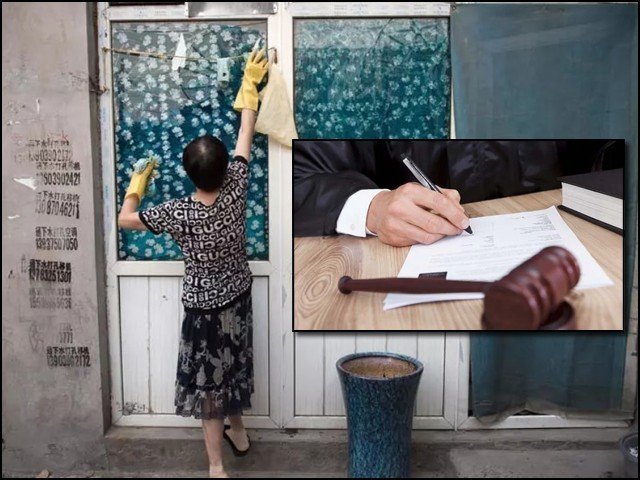 BEIJING: A lawsuit is being debated on Chinese social media these days in which a divorced woman has demanded compensation from her husband for doing housework and raising children for the past five years.

According to details, a Chinese citizen filed a petition in the court after five years of his marriage to get a divorce from his wife.

After some hesitation, the woman also agreed to divorce her husband, but she made it a condition that until she was paid to fulfill all the obligations during her five years of married life, she would marry her husband. Will not even divorce.
The woman argued in court that since her marriage, her husband had not helped her with household chores and children and that she had to carry out all these responsibilities alone.

Therefore, he should be compensated for the five years of hard work which amounts to 160,000 Chinese Yuan (approximately 39 million Pakistani rupees).

In light of the new Family Laws passed in China last year, the court ruled in favor of the woman after reviewing her demands.

However, the ruling said that in return for the divorce, the woman was entitled to only 50,000 yuan (1.25 million Pakistani rupees), which her ex-husband would pay her.

The second part of the same decision states that after divorce, the man will pay his ex-wife 2,000 yuan (about 50,000 Pakistani rupees) a month in monthly expenses (non-maintenance).

This is the first and unique (landmark) decision of its kind in China since the introduction of the new family law, which could affect decisions in many other similar cases.

Most Chinese social media users are outraged by the decision. He says that the compensation for five years of “full-time labor” is very low because even an ordinary housemaid in China can easily earn up to 50,000 yuan (Pakistani rupees 1.2 million) a year.

If the woman’s husband did not help his wife with the housework and raising the children, and the woman had to take care of all this alone, then the reward for five years of work would be very high.