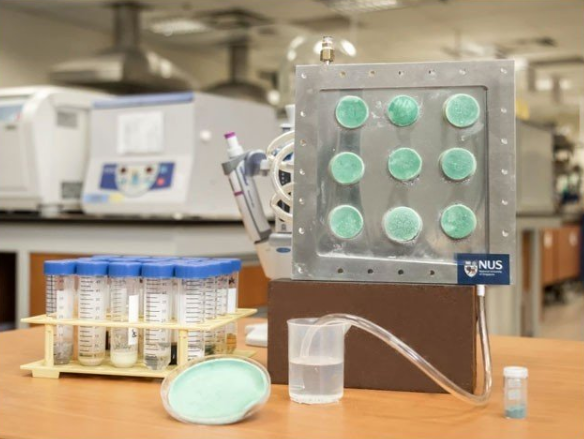 A sponge that makes fresh water by absorbing vapors from the air
SINGAPORE CITY: Scientists at the National University of Singapore have invented a lightweight sponge that absorbs air vapor and converts it directly into clean and potable water without any kind of electricity or sunlight. Do not need
This sponge is very light and soft which is counted among the “airgel” type substances.

However, the manufacture of this aerogel uses a durable chemical substance called “Metal Organic Framework” (MOS), which has a molecular structure similar to a cage and its density. Is also very rare; That is, even a small amount of this substance takes up a lot of space.
Another additional feature of MOS is that it has the natural ability to attract water on one side and repel it on the other.

Taking advantage of the same feature of MOS, Singapore experts have used it in a new sponge that absorbs moisture (water vapor) in the air on the one hand, converts it into water and drains the water on the other Does out

Since it does not absorb any vapor other than water, the water it produces is also pure.

Experts say the water thus obtained is even cleaner than the standards set by the World Health Organization (WHO).

It remains to be seen how this sponge performs in arid and desert areas, but in its current state it is certainly useful for areas where the humidity is high but clean drinking water is scarce. ۔